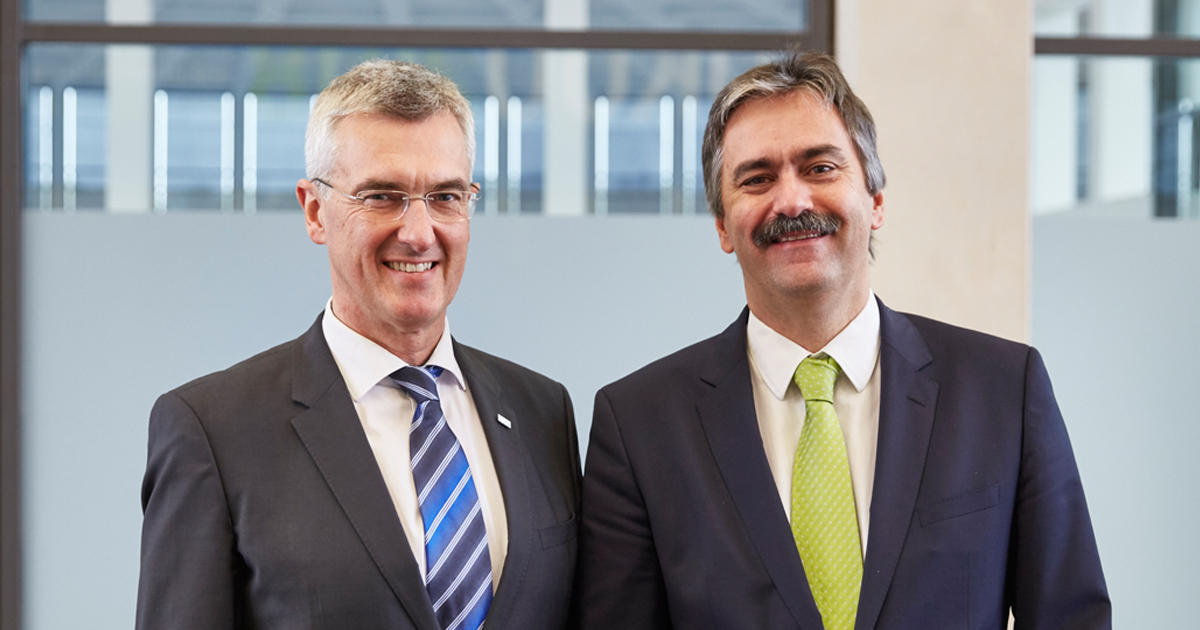 Prof. Dr. Paul A. Grützner (l.) is the new President of the DGOU and Prof. Dr. Carsten Perka the Deputy President © Intercongress

The German Society for Orthopaedics and Trauma (DGOU) is under new leadership. Starting 01 January, Prof. Dr. Paul Alfred Grützner will be President of the DGOU. He is the Medical Director of the BG Clinic Ludwigshafen and Director of the Department for Trauma Surgery and Orthopaedics. Prof. Dr. Carsten Perka, Medical Director of the Centre for Musculoskeletal Surgery of the Charité in Berlin is Deputy President of the DGOU. Prof. Dr. Bernd Kladny, Chief Physician of the Orthopaedic Department of the Specialist Clinic Herzogenaurach, will continue in his function as Secretary General. Prof. Dr. Dietmar Pennig, Chief Physician of the Clinic for Trauma and Reconstructive Surgery, Hand Surgery and Orthopaedics at the St. Vinzenz-Hospital of the University Cologne (Academic Teaching Hospital of the University of Cologne), will also continue to serve in the role of Deputy Secretary General.

At the DGOU general meeting in October of 2018, Grützner and Perka were elected to lead the Association for the term from 01 January to 31 December 2019. Both will also assume the presidencies of their parent companies in 2019: Dr. Grützner is President of the German Trauma Society (DGU), Dr. Perka is President of the German Society for Orthopaedics and Orthopaedic Surgery (DGOOC).

Paul Alfred Grützner (56) studied Medicine from 1981 to 1987 at the Johannes Gutenberg University in Mainz. In 1989, he received his doctorate at the Neurosurgical University Clinic Mainz. From 1987 to 1996, he worked at the Klinikum Worms where he received his Certificate of Completion of Training in surgery in 1993. This was supplemented by a specialisation in Trauma Surgery in 1995. From 1996 to 2006, Dr. Grützner worked at the BG Clinic Ludwigshafen, serving as Assistant Medical Director since 1999. In 2000, he acquired the specialization in emergency care and in 2001, he was recipient of the Hap Paul Award of the International Society for Arthroplasty. In 2005, Dr. Grützner habilitated in trauma surgery and was appointed the Managing Assistant Medical Director at the Clinic for Trauma and Reconstructive Surgery of the BG Clinic Ludwigshafen. In 2006, he moved to the Klinikum Stuttgart where he served as Medical Director of the Clinic for Trauma Surgery and Orthopaedics. During that same year, he was awarded a professorship at the medical faculty of the University Tübingen. In 2008. Dr. Grützner became the Medical Director of the Centre for Surgical Medicine at Klinikum Stuttgart and acquired a specialisation in Physical Therapy. Since 2009, Dr. Grützner has been the Medical Director of the BG Clinic Ludwigshafen and Director of the Department for Trauma Surgery and Orthopaedics. In 2007, Dr. Grützner served as the President of the International Society for Computer Assisted Orthopaedic Surgery. He has held an extraordinary professorship since 2009 and has been working as Honorary Professor at the Medical Faculty of the Ruprecht-Karls-Universität Heidelberg. In 2017, he served as the President of the Association of Southern German Orthopaedists and Trauma Surgeons (VSOU).

Carsten Perka (53) studied Human Medicine from 1985 to 1991 at the Humboldt University Berlin. After completing his studies, he underwent specialist training as Orthopaedic Surgeon in the Clinic for Orthopaedics of the Charité in Berlin. He received his doctorate in 1994 and was the recipient of the Robert Koch Award in 1995. From 1996 to 2003, Dr. Perka served as Assistant Medical Director for Orthopaedics at the Charité and as Head of the Department for Endoprosthetics. He completed his habilitation in 2000 and became a member of the board of the Working Group Endoprosthetics. Starting in 2003, Dr. Perka served as the Deputy Director of the Centre for Musculoskeletal Surgery of the Charité and as Head of the Clinic for Orthopaedics. In 2006, he was appointed the W3 endowed Professorship for Endoprosthetics and Regenerative Medicine at the Charité Berlin. In 2008, Dr. Perka held the position of President of the Norddeutsche Orthopädenvereinigung (Orthopaedist Association of Northern Germany). Since 2009, he has been serving as Professor for Orthopaedics at the Charité, and since 2010 as Chair of the Norddeutsche Orthopäden- und Unfallchirurgenvereinigung (Orthopaedist and Trauma Surgeon Association of Northern Germany). During the American Academy of Orthopaedic Surgeons (AAOS) in 2013, he was the Presidential Spokesperson of the American Hip Society. He has been serving as the Medical Director of the Musculoskeletal Centre at Charité and as Speaker of the Executive Committee of the Endoprothesenregister Deutschland (EPRD - German Endoprosthesis Register). He is a member of the steering board of the AO Recon and leads the Education Board of AO Recon. He is also the Chair of the Membership Committee of the International Hip Society. In 2016, Dr. Perka was President of the AE - German Society for Endoprosthetics. To date, he has published more than 375 articles in listed magazines.

President of the German Congress for Orthopaedics and Trauma Surgery

As Presidents of the DGU and of the DGOOC, Prof. Dr. Grützner and Prof. Dr. Perka are also Congress Presidents of the German Congress for Orthopaedics and Trauma Surgery 2019 (DKOU) together with the Congress President of the Professional Association for Orthopaedics and Trauma Surgery (BVOU), Dr. Thomas Möller. With more than 10,000 visitors, the DKOU is Europe's largest congress in its field. In 2019, it will take place from 22 October to 25 October in Berlin. The focal points will be diagnostics and imaging methods, arthrosis, illnesses and injuries of the spine, pain management, endoprosthetics, joint injuries, complications and comorbidities, orthogeriatrics and orthopaedics as well as trauma management.

The motto of the DKOU 2019 is “Knowledge needs values”. It addresses the fact that doctors provide services at a high medical level every day while facing conflicts of economic pressure, political misdirection and lack of staff.  The motto of the congress is intended to be a guiding theme for actions based on knowledge and values in orthopaedics and trauma. The Congress Presidents have invited Italy and Canada as guest countries this year: “Our patients need expertise, humanity and a responsible approach to medical progress. Those are the fundamental values of our medical agency,” notes Dr. Grützner. Dr. Perka underlines the motto of the congress: “For us, it is a matter of importance to be able to offer all health professionals from all subdomains of our field an attractive option for increasing knowledge and orientation while providing the necessary room for a discussion of values.”
View DKOU trailer

The work of the two new DGOU Presidents Prof. Dr. Grützner and Prof. Dr. Perka will be supported by the Executive Board and the Joint Boards as well as 20 additional Committees.