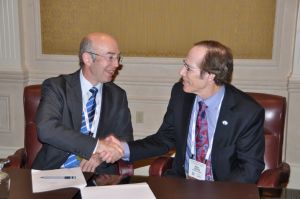 The German Congress of Orthopaedics and Traumatology (DKOU) is pursuing a more international approach in 2015. In March, the congress president of the German Society for Orthopaedics and Orthopaedic Surgery (DGOOC), Prof. Rüdiger Krauspe, and the president of the German Trauma Society (DGU), Professor Michael Nerlich, represented German orthopaedic surgeons and trauma surgeons at the 2015 Annual Meeting of the American Academy of Orthopaedic Surgeons AAOS in Las Vegas. During the event, Nerlich signed an official collaboration agreement with two American professional organisations, the Orthopaedic Trauma Association (OTA) and the Orthopaedic Research Society (ORS). This collaboration brings with it various new opportunities, which Nerlich discussed in detail with Miriam Buchmann-Alisch.

Professor Nerlich, you have just come back from the AAOS Annual Meeting in Las Vegas – what have you taken away from it?

Nerlich: In addition to the technical exchange with our American peers, we have signed collaboration agreements with the OTA and the ORS, documented everything, and defined our goals for the coming years.

How did this collaboration come about and what are the goals?

Nerlich: For our part, we wanted to make our congress more international, to offer a programme in English. And of course we wanted to do this with a partner that was well known among non-German-speaking orthopaedists and trauma surgeons. The OTA is the best-known international group and also has many European members who regularly attend the American meetings.

This is one of few collaborations that the OTA has entered in recent years...

Nerlich: Yes, some associations from Europe and other parts of the world have not been successful in that. The president of the OTA put it nicely when he said: “We are quite picky.” So the fact that the OTA has agreed to collaborate with us is also a certain mark of distinction for German orthopaedics and trauma surgery.

The OTA is to support an international session at the DKOU 2015.

That’s right. Together with our new partner the OTA, we have planned a half-day for an international session. Around half of the contributions will be presented by the OTA, and the other half from German or other European experts.

What are the concrete plans?

In the course of adopting a more international orientation, you have also initiated a collaboration with the Orthopaedic Research Society. What have you planned for the DKOU with its representatives?

Nerlich: The ORS will be represented by four keynote speakers who have been recommended by the ORS and are all established researchers. Céline Colnot will speak about fracture healing and osteology. Anthony Hollander and Scott Rodeo will discuss the regeneration of bone, cartilage, and soft tissue, including issues related to stem cells, PRP, and growth factors. Robert Mauck will be the keynote speaker for the session on mechanobiology. The representatives will work with our DGOU Basic Research Section to support and organise the Section’s sessions. This allows us to address not only the clinical side of trauma surgery in America but also the fundamental research that is going on in O&T.

This year’s DKOU is slated to be particularly internationally oriented. Is this already evident in comparison with previous years?

Nerlich: We are certainly very broad in our approach. The programme will be engaging, it will be international, and it will span the entire field of orthopaedics and trauma surgery. In this year a total of 250 abstracts have been submitted in English, which is more than we have ever had before. They are still being assessed, and reviewers from the ORS are working on that as well.

In turn, the DGU/DGOU will be a Guest Nation participant at the OTA Annual Meeting in October 2015 in San Diego, California.

Nerlich: Yes, the Americans have said that they would be happy to welcome Germany as a Guest Nation at the Annual Meeting of the OTA. This is a great honour, and of course we immediately confirmed that we will attend.

Which topics do you plan to focus on?

Nerlich: Our delegation will introduce the orthopaedics and trauma surgery healthcare system in Germany and will also give specialist lectures. We will of course show how the German trauma system has evolved thanks to the DGU’s trauma registry and trauma network. That has put us a step ahead in terms of having full coverage of the entire country.

What other specific actions are planned for the coming years?

Nerlich: This is also addressed in the collaboration agreement. This collaboration will not be a flash in the pan. We have agreed that over the next three years, we will engage in a regular exchange of knowledge and will be represented more prominently at the American meetings.

Nerlich: We can learn from the Americans in the areas in which they are highly specialised, for example in certain operations on joints that they perform in large numbers. At the same time, German O&T has absolutely nothing to be ashamed about. We are absolutely on par, and at the top we are even more diversified than the Americans. The United States has leading universities and experts, but in terms of the overall size of the country, there are not actually that many more experts than in Germany.

Professor Nerlich, thank you very much for the interview.