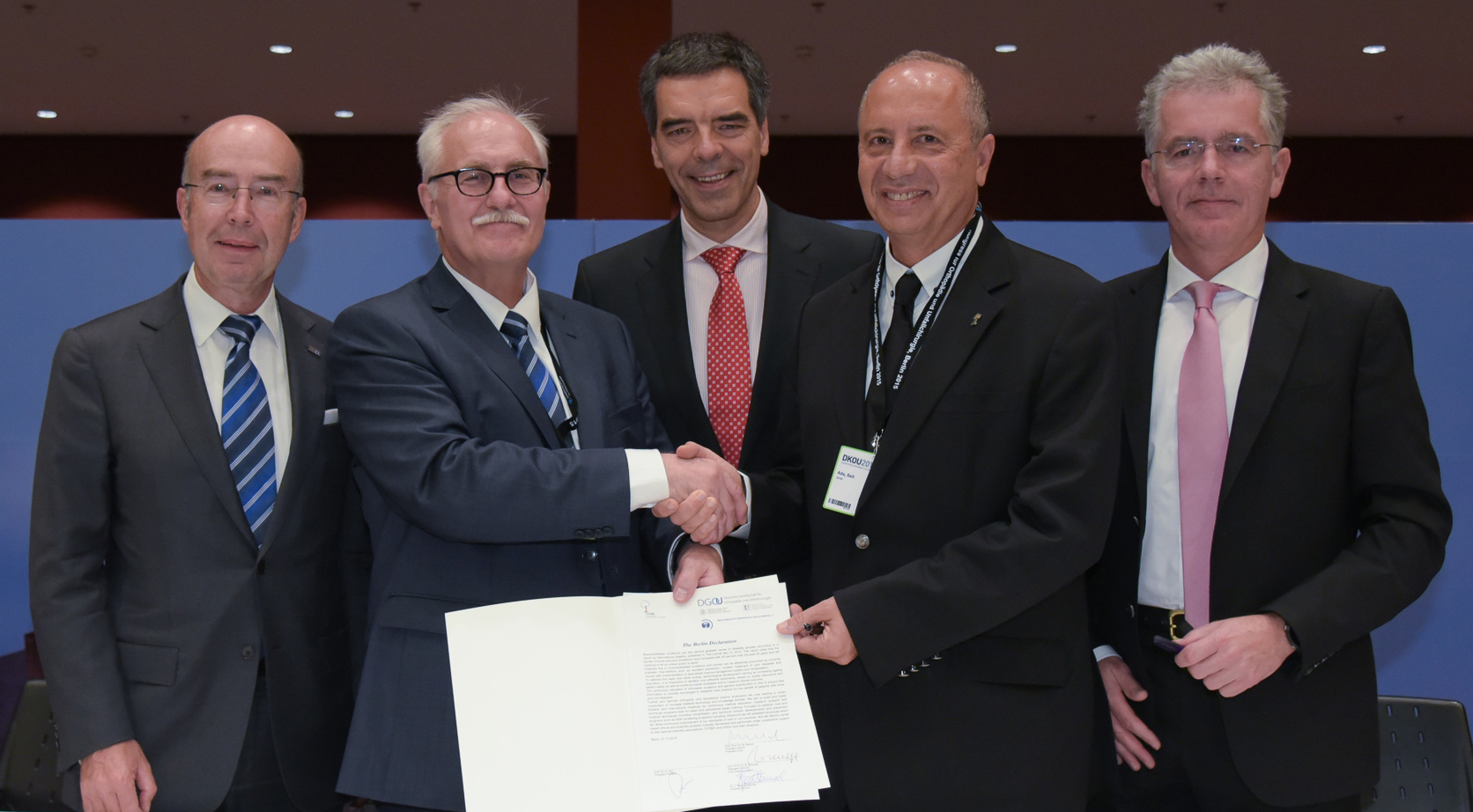 Hüseyin Avni Karslıoğlu, Ambassador of the Republic of Turkey in Berlin since 2012, said that it was a great honour and a joy for him to welcome German and Turkish guests to the embassy. He greeted around 150 representatives of national and international professional associations who had come to Berlin for DKOU 2015 and were assembled at the Turkish Embassy in Berlin’s Tiergarten district. It had become something of a tradition, said Karslıoğlu, to host visitors from the healthcare sector there. He named three areas of activity for which he threw open the embassy’s doors: healthcare, youth education and the economy, going on to say that the present meeting was the first health symposium between Germany and Turkey.

The foundations for the Berlin Declaration were laid in 2013 when Congress presidents Prof. Rüdiger Krauspe and Prof. Michael Nerlich (German Society for Orthopaedics and Trauma), and Dr Hans-Jürgen Hesselschwerdt (Professional Association of Orthopaedic Surgeons) declared Turkey the partner country at DKOU 2015 and invited TOTBID representatives to help design the programme for the international sessions. However, cooperation is not to be merely confined to DKOU 2015.

The DGOU and BVOU hope that the agreement will play a part in strengthening shared international efforts to tackle health problems. The importance of cooperation is highlighted by the current refugee situation, Krauspe said in his address. He emphasised that care for people in need has always been the driving force for physicians and nurses. Today, he said, the need for such help is even increasing. “We might also succeed in building up cooperation on shelter and rescue programmes,” said Krauspe. Tolerance and greater knowledge of cultural diversity would contribute to a shaping a more peaceful world, he continued, pointing out that in the light of current events this is becoming more important every day, and that education and healthcare are a crucial basis for all other social developments. “Let us, too, build bridges between our orthopaedics and trauma surgery societies and between our cultures. Through tolerance, fairness and openness we can benefit together from scientific and clinical successes in Germany and Turkey, thereby improving outcomes for our patients,” said Krauspe. He went on to refer to the architecture of the embassy building, which symbolises a bridge linking the European and Asian parts of Turkey across the Bosporus.

President of TOTBID, Prof. Sait Ada, said that he felt highly honoured to be entering into this cooperation with German colleagues. He also referred to the current political situation by quoting the words of Atatürk, the founder of the Republic of Turkey: “Peace at home, peace in the world.” In expressing his hope that what the professional associations achieved on a small scale might also be achieved on a larger scale, he no doubt struck a chord with many guests.

Krauspe, Nerlich and Ada then joined Dr Johannes Flechtenmacher, President of the Professional Association of Orthopaedic Surgeons, in signing the Berlin Declaration 2015. Among other things, the Declaration states that solid basic and advanced training of orthopaedists and trauma surgeons is essential for dealing successfully with the rising incidence of orthopaedic disorders and traumatic injuries worldwide. The agreement helps to strengthen the transfer of knowledge and technology between Turkish and German orthopaedists and trauma surgeons.

Before the evening was rounded off with Turkish specialities and conversation, Nerlich expressed his desire that the present Berlin Declaration might be followed by many others.

The cooperation agreement in its wording:

Musculoskeletal conditions are the second greatest cause of disability globally according to a report by international experts, published in The Lancet dec.15, 2012. The report notes that the burden of bone and joint conditions have increased with 45 percent over the past 20 years and will continue to do so unless action is taken.

Disability due to musculoskeletal conditions and injuries can be effectively prevented by currently available interventions such as accident prevention, modern treatment of joint diseases and injuries with implementation of specialised trauma management system and rehabilitation.

To address the rapid, and never ending, technological development serving an increasing ageing population, it is imperative to develop cost effective treatments, based on quality assurance and patient safety as well as evidence based strategies and to measure clinical outcome.

The continuous education of orthopedic surgeons and general practitioners is vital to ensure that information is mutually exchanged to establish best practice for the benefit of patients with bone and joint diseases.

Turkish and German orthopedic and specialized trauma physicians are now starting a closer cooperation to increase bilateral technology and knowledge transfer. We aim to build and foster bilateral and international meetings for continuous medical education, research projects and exchange programs both for basic and specialized expert training. Focused on patients’ care and surgical techniques including rehabilitation and technical orthotic developments and prevention programs such as DDH screening programs including ultrasound we will establish structures which will allow continuous improvement of our standards of care in our countries. We will identify center based clinical and scientific projects mutually developed and performed under cooperative support by the national scientific associations TOTBID and DGOU and their divisions.